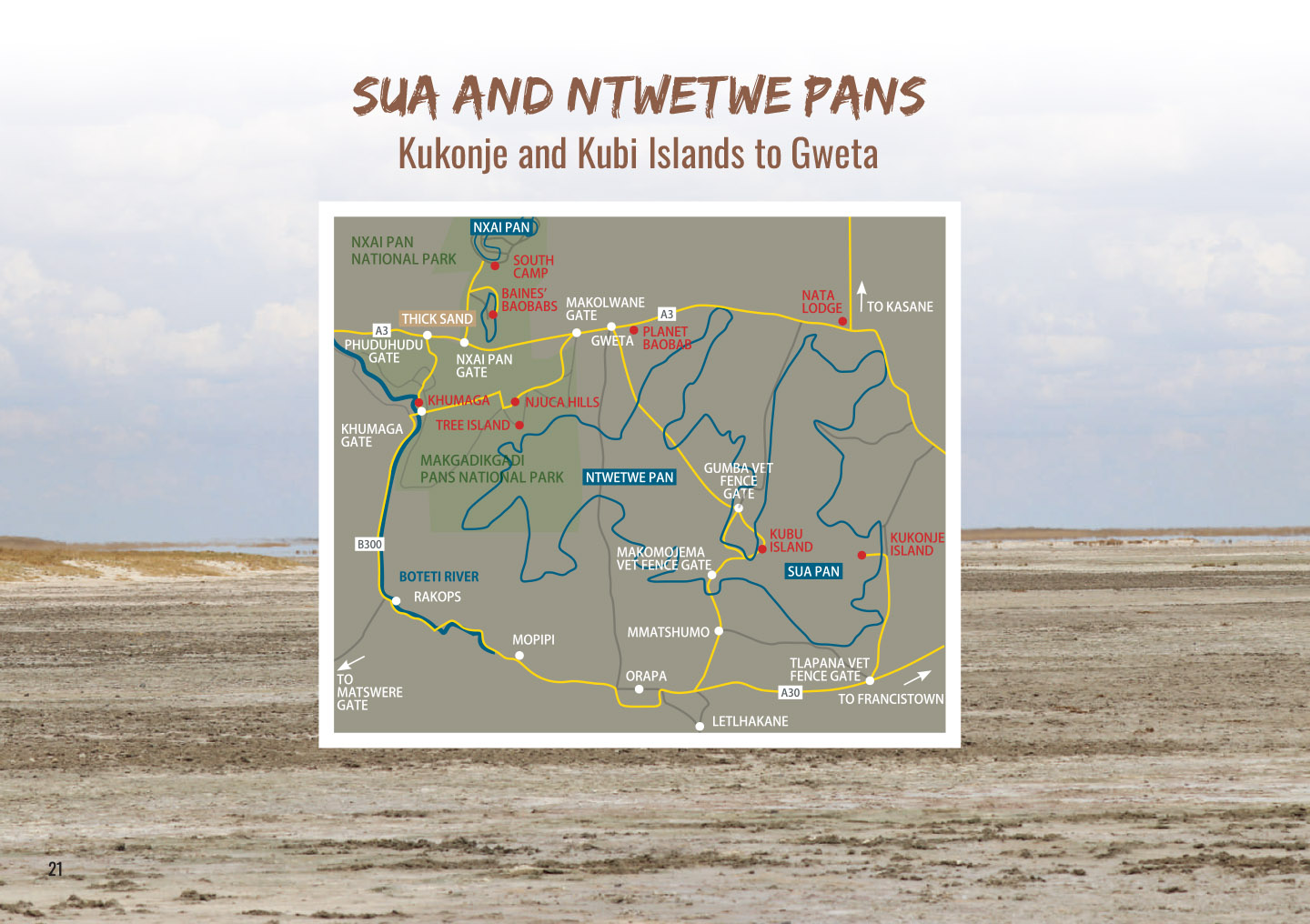 There are small pan systems scattered throughout Botswana, but when people talk of ‘the pans’ they mean Sua and Ntwetwe – roughly 8 000km2 of mud-crusted immensity, speckled with baobabs and isles of golden grass.

Access to the pans is via a handful of dirt tracks that run roughly north-south between the tarred A3 and A30 highways. From the south, Letlhakane is the major supply point, a large town with all you’ll need for the trip. You’ll find emergency water at the vet control gates near Kukonje, at Kubu campsite, and at the Gumba vet fence, but there’s no public water or fuel points un l Nata or Gweta, so fill your tanks.

On the far east of Sua Pan is Kukonje Island, a spectacular but often overlooked atoll, 7km from the pan’s edge. To reach Kukonje from the west, take the Jeep track north off the A30, 50m after the Tlapana vet fence gate. The trail is firm when dry, but can become waterlogged and muddy as it nears the pan.

After 50km, there’s a gate on the le leading across the pan. There’s a checkpoint and you’ll be asked to sign in, but access is unrestricted and camping on the island is free. The final 7km to the island can be tricky. Even in the dry season, crossing the pan is slippery, and in the wet season it’s difficult to impossible, but definitely worth it if conditions allow. Currently, there are no dedicated stands on Kukonje, although there are three or four good spots, either on the northern ridge or under the huge baobab near the western edge. It’s a ques on of driving around and stopping wherever is free and takes your fancy. There are no facilities of any kind, just uninterrupted views, and beautiful isolation – spoilt only slightly by intermittent cell-phone reception up on the ridge.

40km due west of Kukonje is Kubu (or Lekhubu) Island, a low, rocky protrusion covered in baobabs, on the opposite edge of Sua Pan. Even in dry conditions, it’s extremely ill-advised to attempt a crossing directly.

Rather, drive back south to the A30, head west, and then take the tar road north to Mmatshumo. From there, it’s a bumpy 20km track to the Makomojema vet fence. The final 25km to Kubu is easy when dry, but this border region between Sua and Ntwetwe pans can flood in the summer rains.

Unlike Kukonje, Kubu has an established community-run campsite, which although very basic, has pit loos (the smallest you’ll ever try to squeeze into) and 13 designated stands on the western edge of the island. The ones to the north, especially stand 6, have the best sunset views. You can book in advance, or failing that, pay cash on arrival.

From Kubu, a rocky, twisting track heads 20km northwest to the Gumba vet fence. Here you can head north to Nata, or else drive along the fence to the west, crossing Ntwetwe Pan to Gweta. The route across the pan is stark and desolate – a flat, featureless horizon-line in all directions. It’s a beauñful route and, like everywhere else on the pans, an easy, meditative drive when conditions are dry.

Any hint of water, however, can turn the otherwise docile flats to sticky, wheel-sucking mud, so rather take the Nata track due north between the pans if there’s any sign of water. From the northwestern edge of Ntwetwe Pan, it’s just 30km to Gweta, but even with a GPS device, it’s easy to take a wrong turn and add to that distance. Fine, powdery dust covers the track, which forks and forks again through low acacia and Mopani trees.

But keep heading north and all roads they do eventually lead to Gweta, where there’s a cold one waiting at the best bar for miles — Planet Baobab.

The A3 and A30 are tar and in good condition, but the trans-pan roads vary. In the dry winter, these roads are firm but can become impassable when wet. Crossing between Kubu and Kukonje is not a good idea in any season. From the edge of Ntwetwe Pan to Gweta, the tracks are confusing.