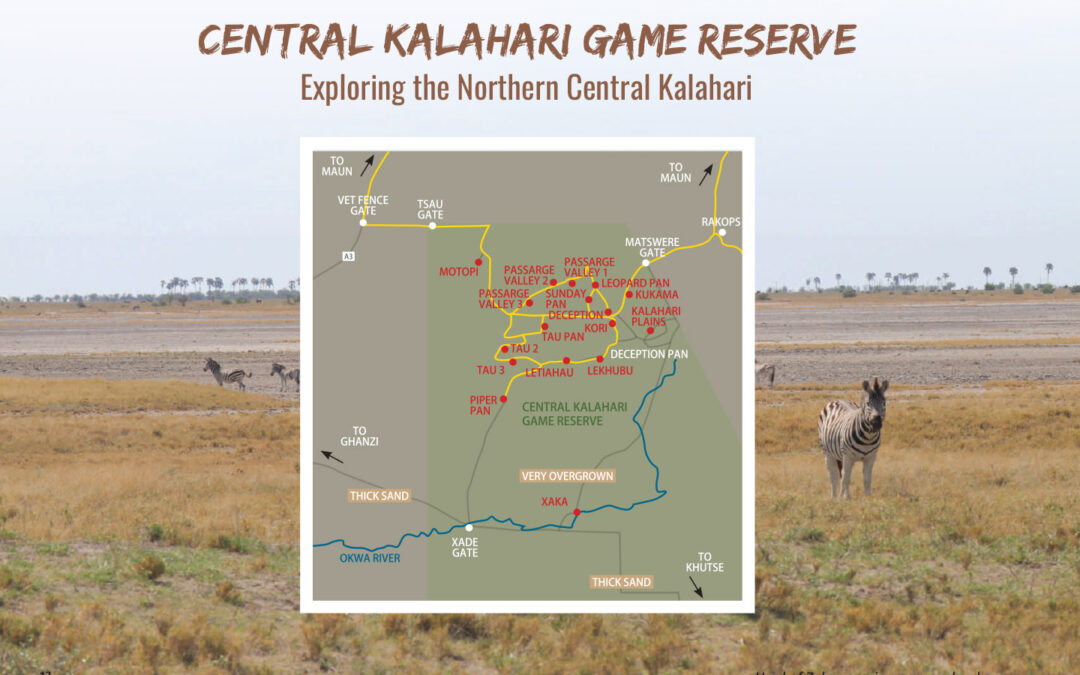 There are many public-access camping areas in the Central Kalahari Game Reserve (CKGR). Most of the game congregates around the pan systems to the north, which is also where you’ll find the popular camps and game-viewing tracks. Other than at the gates, there is no water at any of the camps in the park.

If you have braved the sandy, overgrown trail from Khutse, Xaka (or Xaxa) is a worthwhile stop. The area has two sites, stand 1 on a low hill feels a li le more secure and away from the ac on, while stand 2 – 600m to the east – is more lively (and smelly) beside a permanent waterhole. The water attracts game for kilometers around, and the area is known for lions and elephants. Both stands are extremely basic with no facilities. You’ll need a GPS just to know you’ve arrived.

Xade Gate is 65km to the west: 3 hours of bumps, sand and stops to clear the trail. Things firm up with 5km to go, and there’s good water and hot showers at the gate.

Here the track splits in two, with the op on to stay in the park and drive the 75km north to Piper Pan, or exit and head for Ghanzi, 175km to the west. If you’re exiting, the first 70km to Ghanzi is very thick, deep sand, but it becomes graded dirt at the Xade waterworks so the last 100km is much quicker. If heading north, the trail to Piper Pan is slow: alternately hardpacked and sandy as the road crosses a succession of small pans.

Piper has two sites ‒ stand 2 on a low, sandy rise just off the southern track, and stand 1, which is 3.5km to the north, under a clump of acacias on the pan’s edge. Both have shade, and pit-loo and bucket-rig ablutions, but stand 1 is best, with great views across the pan and a good chance of seeing a bat-eared fox.

There are eight camping areas RAKOPS along the loop: Deception, the biggest, with six stands; Kori with four; Passarge Valley with three spaced far apart along the northern track; Sunday Pan with three; and Leopard Pan with one stand, which is 7km north of Sunday Pan. Then there are the Tau sites to the west and Letiahau and Lekhubu on the southern loop. The Tau sites are slightly confusing: Tau1 is no longer in use as it was deemed too close to the luxurious Tau Pan Camp; Tau 3 at Phokoje Pan (with a completely flattened toilet) is a single stand on its own; and Tau 2, another single stand on San Pan, is a further 15km down the track. Lefiahau and Lekhubu do not have ablutions, and although there’s a waterhole near Letiahau, there isn’t much to recommend these sites.

Besides Piper Pan, there are two remaining camping areas off the loop: Kukama and Motopi. The former is a single stand with no ablutions and access is along a rutted track off the main road to Matswere Gate.

The three stands at Motopi, near Tsau Gate, are also to be avoided. They have the standard ablutions but are overgrown. Stand 2 has good sunset views, but the others are difficult to reach.

For great game viewing and the neatest campsites (all have standard ablutions), Piper Pan, Deception, Sunday Pan, and Kori are the best. The three Passarge Valley stands are also worth a visit, though. They are tucked in sheltered thickets along with the gentle rise that serves as the valley wall in the pancake-flat Kalahari. However water and game are scarce on this stretch and there are better sightings to the southeast.

At Deception Camp (15km north of Deception Pan), the stands are similar: large and tidy, with plenty of shade. At Kori, stand 1 is the best —a cozy camp, closest to the pan. Kori 3 is the biggest, sprawling site under low trees. Sunday Pan has the best permanent water in the area and stands 3 and 4 are great.

They’re quite close together, but at just 600m from the waterhole on the highest rise in the area, they have beautiful views over the pan to the west. Everywhere in the CKGR is desolate and remote – it’s why you go there. But even a slight elevation makes the vast expanse that much more impressive.

The track from Khutse is overgrown, with thick sand to Xade Gate. West of the gate, the sand continues for 70km, then the track is graded dirt to the A3 highway. The 40km between Rakops and Matswere Gate is sandy, but firm, with some deep mud after rain. Best access is via Tsau Gate: a good track, barring thick sand 25km from the tarred A3 (there’s a vet fence control 100m north of where the

track joins the tar). Inside the park, pan roads can be muddy and impassable after rain; in the dry winter, the resulting ruts are deep and bumpy. Between pans, the tracks are easier to negotiate. There’s thick sand on the cut line west of Deception campsite.

Xade Gate has good water and hot showers. Matswere and Tsau gates have ablutions, but the water is brackish and limited. Gate times are dawn to dusk.

The best game viewing in Central Kalahari is around the pans. Poper Pan, Sunday pan, and Deception pan are must-visit.