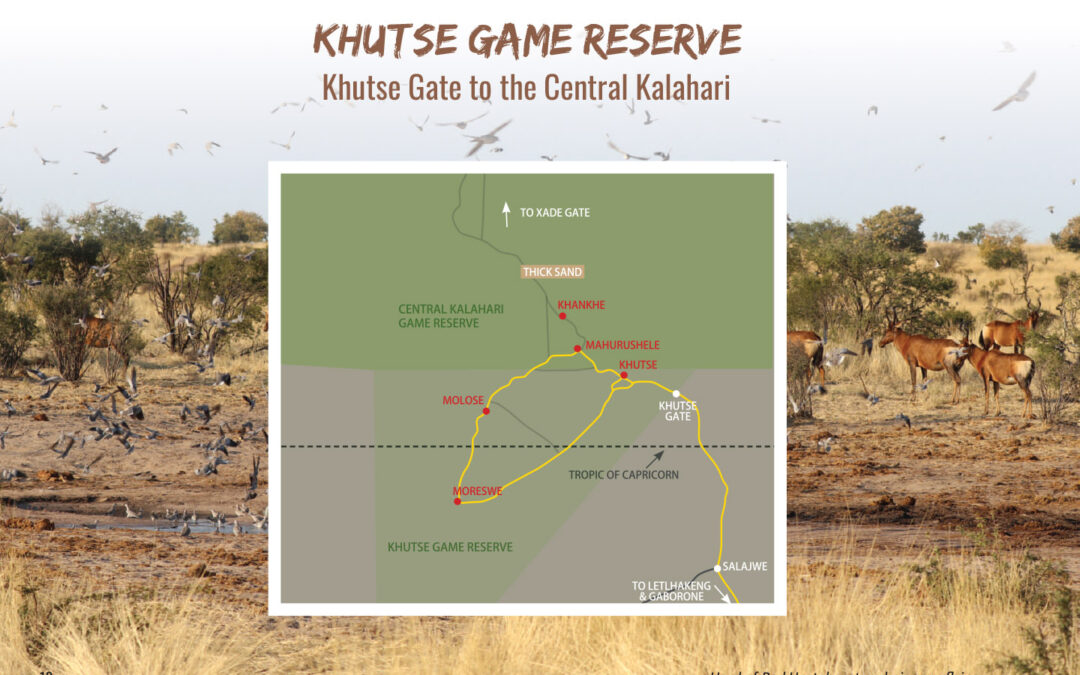 Khutse Gate To The Central Kalahari

Open a map of Botswana and the Central Kalahari is unmistakable: a vast, near-featureless expanse at almost dead centre. Tacked to the bottom, and often overlooked, is a roughly triangular protrusion ‒ a relatively small cluster of pans and campsites joined by a loop of Jeep track.

This unobtrusive lump is Khutse Game Reserve ‒ flat, quiet and beautiful – where the single, main track is well-enough travelled not to be overgrown, but not so well used that you won’t have en re campsites to yourself.

Entrance to the reserve is via a single gate in the east, which in turn has just one access road: 100km of wide, well-graded dirt that heads north from the tarred highway at Letlhakeng. This is the last fuel point before the park and, if you’re continuing north into the Central Kalahari Game Reserve, this will be your last pit stop for at least 600km. Be sure to fill up here before entering the park and be aware that there’s deep sand on the northern track that will significantly increase your fuel consumption.

There’s a single overflow stand at the gate, but the first of the reserve’s five main camping areas is 15km to the west at Khutse Pans ‒ a clutch of 10 neat stands approximately 100m apart, each with a small tree for shade and two small, wood-screened structures containing a pit loo and bucket shower, the standard ablution arrangement for all campsites in the reserve (note: the shower is just a rig ‒ there is no water at any of the campsites).

The campsite at Khutse Pans is the largest in the reserve. Stands 8 and 10 have the biggest trees for shade, while stand 2’s loo and shower are some distance from the camping area for some reason. Otherwise, there is little difference between the stands, which feel wonderfully open, with 360degree views from a grassy plain between the two modest pans. None of the campsites in the park is fenced, so always be aware of animals passing through ‒ there are lions about.

50km to the southwest you’ll find the four Moreswe Pan campsites. The track there is easy to nego ate, despite one or two overgrown patches, but there’s not much game to see in the waist-high bush en route.

Arriving at the campsites from the east, stands 3 and 4 are just off the main track, about 100m apart in a dense thicket. About 2km around the pan to the north, stand 1 is also hidden in thick scrub, but stand 2, situated on a low rise to the west, is definitely the one to book. It’s the only stand with views onto the pan and although the ground is at a slight gradient, it’s flat enough to pitch a tent and the view of the sunrise is spectacular.

The road north to the Molose camping area is in reasonable condition and not too sandy. The stands there are in two sections: stands 2, 3 and 4 lies just off the road to the east, about 300m apart, but stand 1 is completely separate, another 3km further up the road.

Of the first three, pick stand 3 for the best views and stands 3 or 4 for more privacy.

Stand 1, to the north, is practically on the road and is unremarkable except for its proximity to the Molose waterhole (about 500m away). It’s the only permanent water for kilometres in any direction so there’s a good chance of seeing game up close and personal.

On the 25km stretch northeast to Mahurushele Pan, you’ll hit the first stretches of thick sand. Avoid the two straight cut lines north and east, which are sandy and very overgrown, and continue up the main track, which firms up briefly around the pan.

Of Mahurushele’s three stands, number 3 is the best. Stands 1 and 2 are just off the main track to the south (number 2 is slightly more private, with a bigger tree for shade), but 1.5km to the north, stand 3 is tucked under a large acacia tree and although you can’t actually see the pan from the site, it’s just metres away, behind some low bush. The fifth and final camping area is 10km north at Khankhe Pan. This is arguably the least interesting camping area in the reserve, with four stands clustered around the main track in flat, sandy scrubland. Avoid stand 1, which is right on the road. Stands 2 and 4 are the most private, with small trees for shade.

From here the track continues to the northern Central Kalahari. It’s thick sand all the way, so a me-saving alternative is to exit the park at Khutse Gate and take the tar roads to Rakops or Ghanzi.

Excellent, graded dirt to the gate and mostly smooth, open Jeep track around the southern loop. Some short overgrown sections. Thick sand starts north of Mahurushele Pan and continues almost unbroken for 230km to the Central Kalahari’s Xade Gate and beyond. The cut line north is overgrown and very slow going.

Open from dawn to 6:30 pm. You’ll get a free photocopied map on arrival. Cool drinks and snacks are on sale. Borehole water is available when the pump works.

Deep sand, such as on the track between Khutse and northern Central Kalahari, significantly increases fuel consumption. Be sure to take this into account when planning fuel stops.