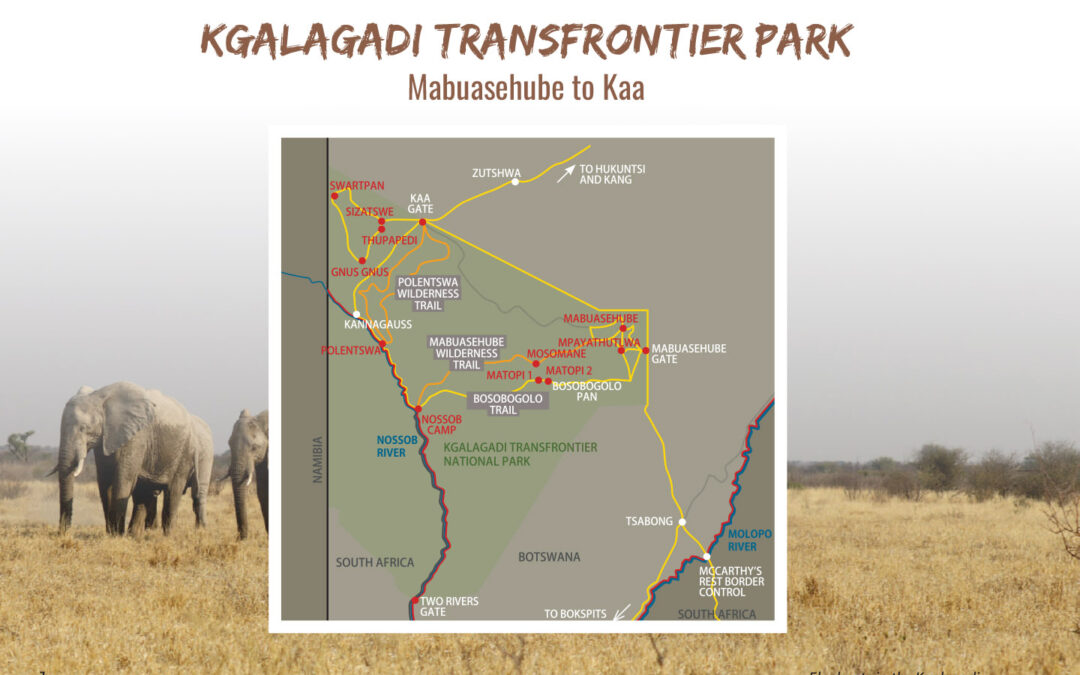 The Kgalagadi Transfrontier Park covers 37 256km2 of seasonal pans and Kalahari grassland to the east and west of the Nossob River – the natural border between Botswana and South Africa.

Two Rivers (Twee Rivieren) Gate is the most-used entrance at the park’s southernmost p. Here you can choose to stay within park boundaries or pass through immigration which allows you to exit into Botswana further north.

On the Botswana side, the best part of the park is around Mabuasehube to the east. To reach this area from Two Rivers is a full day’s drive from Nossob Camp to Bosobogolo Pan, and then it’s another full day back west to explore the area around Kaa. With the EastWest tracks offering much the same in game viewing and scenery, driving both ways is a waste. So to get the most out of the Botswana sections, we suggest avoiding Two Rivers completely and entering Botswana at one of the border controls along the Molopo River.

From the west, the Bokspits border post is best, with a good tar road all the way to Tsabong. From the east, cross at McCarthy’s Rest, and head north. In both cases, Tsabong is the last stop for fuel and supplies. Just north of town, the tar ends, with graded dirt (beware of potholes) for the first 75km. 36km before the Mabuasehube Gate, thick sand slows progress dramatically so allow about 2.5 hours to reach the gate.

The Mabuasehube region has some of the best wild camping in Botswana – a country with no shortage of spectacular campsites. There are several camping areas to choose from, with two to four stands at each. All are unfenced, but only three have waterholes, which is where you’re most likely to see game – especially Kalahari lion. These are the Mabuasehube and Mpayathutlwa pans, and the campsite at Mabuasehube Gate. The latter has (rather dilapidated) ablutions and although there’s a photo in the gatehouse showing a leopard behind the bookings desk, it still feels like you’re not quite in the park.

The sites further in, especially at the two main pans, are the ones to book.

Mabuasehube Pan has four stands: stand 1 with beautiful views from a low ridge to the west, stand 2 and 3 to the south and stand 4 on the eastern side. Mpayathutlwa Pan has three stands, each well-spaced along the north of the pan. There are taps at some stands, but water and other facilities are not guaranteed. Some have pit loos and a wooden A-frame for shade, but the sites are very basic, so you’ll need to take everything with you ‒ and be prepared to find a bush behind which to do your business.

The southernmost of these, the Bosobogolo trail, is the main route west ‒ sandy in places, but not treacherous, and with campsites at the Matopi Pans halfway if you want to break the 7-hour drive to Nossob Camp. Further north, the Mabuasehube Wilderness Trail is an exclusive, one-way 4×4 trail that also ends at Nossob. Only one booking per day is allowed, with an overnight stop at the beautiful and totally isolated Mosomane Pan. The camps at Matopi and Mosomane have no facilities, so take everything with you.

Slightly further north, the Mabua-Kaa track runs northwest to Kaa Gate. It’s overgrown and underused and the 7hour trip is not recommended unless you love total isolation, or specifically want to scratch your vehicle. Instead, exit the park and go to Kaa via the cut line along the northern border. It may seem less exci ng, but there are no fences along the road and the game moves freely between the park and the buffer zone to the north. There are two stands at Kaa Gate, also unfenced, and unlike Mabuasehube Gate, these do feel wild, with a permanent waterhole at the entrance that makes it a popular spot for lions. From Kaa, there are three southern tracks to explore.

To the southeast lies the three-day Polentswa Wilderness 4×4 Trail which, Iike the Mabuasehube TraiI, must be booked n advance Its three overnight stands are only available to trail users.

To reach the start you’ll need to take the second southern option: the main track to Kannagauss (sandy, but easy-going). From there, it’s a short hop to Polentswa and the first leg of the trail.

The third route from Kaa heads west to Swartpan. This loop has the only other camping in the region, with one stand each at Sizatswe, Thupapedi, and Gnus Gnus, and two stands 500m apart on the northern edge of Swartpan. None of these has water or facilities and there’s isolation aplenty. The loop is a mix of the white pan and red Kalahari sand, corrugated and over-grown for long stretches; a 7-hour, bumpy round trip with not much to see that’s different from Mabuasehube.

Back at Kaa Gate, the exit road north to Zutshwa is arguably better for game and scenery than any in the northwest of the park. A sandy track winds into the suddenly open bush, with stretches of beautiful grassland that are home to huge herds of eland and oryx.

From Zutshwa, the road widens and it’s good gravel to Hukuntsi, and from there it’s an hour on tar to the A2 highway at Kang.

Thick sand 36km south of Mabuasehube Gate, and sandy hills on the two Nossob trails. Vehicles with trailers might struggle. Roads in the northwest are little used and overgrown.

Two Rivers, Mabuasehube and Kaa Gates have water and ablutions and are open from dawn to dusk, although late arrivals can usually find a ranger at the gated compound. There’s no entry after dark, but if there’s space you can sleep at the gate stands.

The DWNP manages all campsites on the Botswana side. For Camping costs, park, and vehicle fees see the website.

The Mabuasehube and Polentswa Wilderness 4×4 Trails are booked through the DWNP, in addition to the usual park and vehicle fees.

In the Botswana section of the Kgalagadi, the trails are often overgrown with tall grass. Fix a seed net to the front of your vehicle to stop your radiator from being clogged.