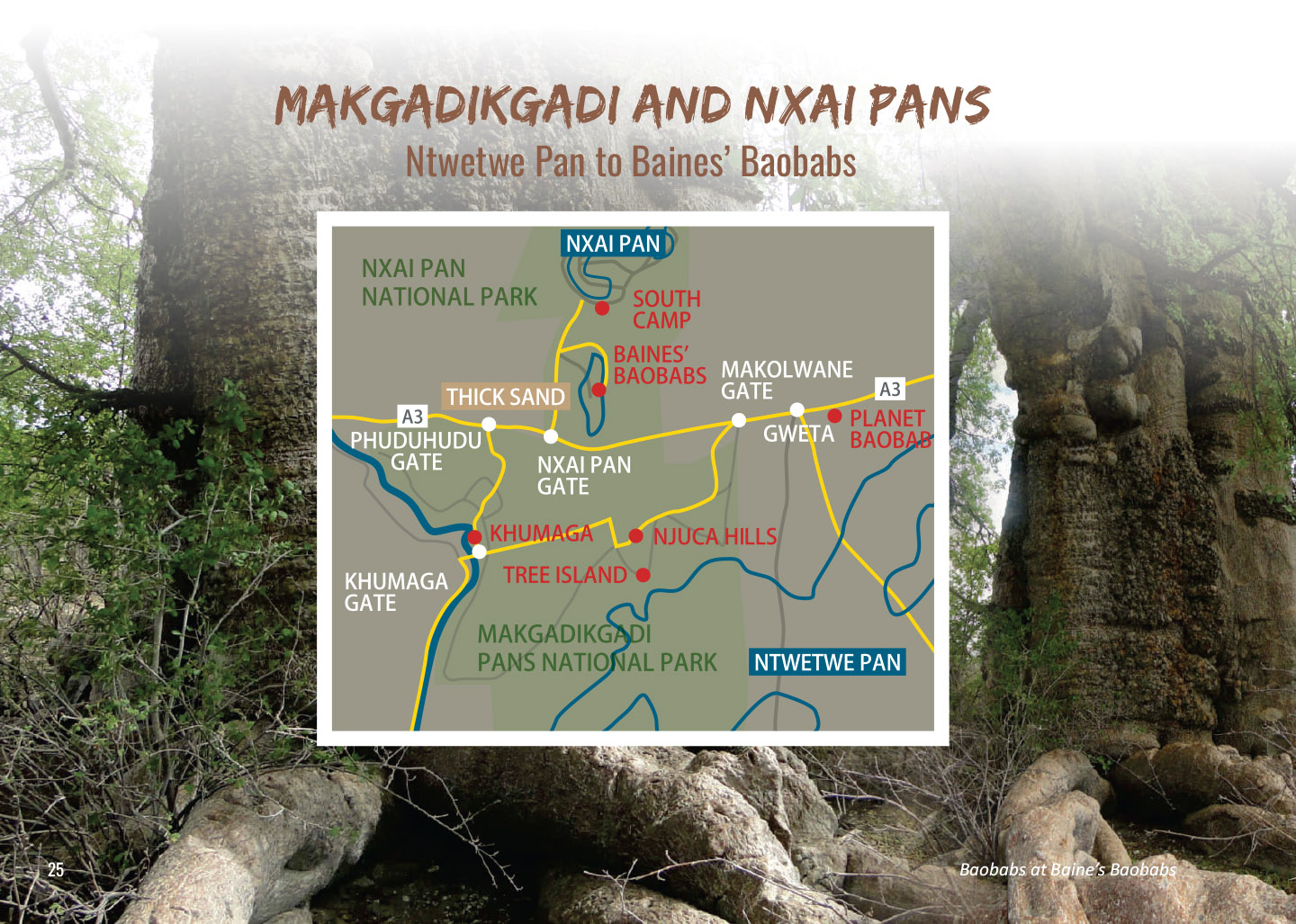 With only one main track and a few small loops to explore, a visit to this national park doesn’t present a lot of choices. Camping options are also limited: a large, well-maintained campsite at Khumaga and two small, basic camping areas in the center, Njuca Hills and Tree Island. That’s not to say you should give it a miss: golden grass blankets the central plains, and the light at dawn and dusk

is spectacular. Plus, there’s plenty of game along the Bote River. Ca le also cross the river and wander along the eastern bank, but they’re outnumbered by huge herds of zebra, as well as hippo, elephant, and kudu, and there are lions too.

Entering at Makolwane Gate, it’s 45km to Njuca Hills campsite. ‘Hills’ is a misnomer, but the ever-so-slight rise does cons tute the highest elevation for kilometers around. There are two unfenced stands, with Botswana’s usual pit-loo and shower-rig ablutions. Stand 1 is small with an awkward concrete bollard and fire pit that makes setting up camp there unnecessarily difficult. Stand 2 is much larger with better shade and lovely sunset views.

Tree Island Camp is 8km southeast, along a rough track that sees li le use. It has three stands and standard ablutions. Again, there are no fences and the stands sit close together between a scattering of small pans. It’s a more beautiful setting than Njuca Hills, although the track to get it is bumpy and overgrown. A radiator seed net is advisable throughout the reserve, but especially on these southern tracks, which are not well maintained. Without a net, you’ll be picking grass and seeds out of your radiator for weeks.

From Tree Island, avoid the overgrown southwestern track and take the more direct Khumaga road to the west. Khumaga Camp is neat and has hot showers. The 10 stands all have taps and shade and are clustered together between two large ablution blocks. Stand 10, on the northern edge, is the most private.

If you’re exiting the park here, it’s a 2km drive south to Khumaga Gate on the eastern bank of the Bote River. If the water level is low it’s possible to drive across the river, or otherwise take the pontoon ferry for a quick shu le to the tarred B300 beyond.

Further south, the track continues along the fence line before heading back east to Njuca Hills. The fence along this part of the track is falling down and in many places lies broken across the trail. It’s slow going with not much to see ‒ the more interesting areas are to the north.

For Nxai Pan, drive north from Khumaga to Phuduhudu Gate, but give yourself plenty of me to explore the sandy river track and ‘hippo loop’ on the way. The wide riverbed is dotted with ilala palms and is a focal point for the game, although the presence of ca le and the occasional wave of music from the far bank do spoil the effect a little.

The trails in and around the river are very sandy and slow, but the main track firms up towards Phuduhudu, and from there, it’s 11km of tar east to Nxai Pan gate.

Nxai Pan National Park has even fewer kilometers of roads than Makgadikgadi, but the spectacular camps at Baines’ Baobabs and the game-rich plains around South Camp to the north make it a must-see destination. Access is via a single, very sandy track from the park’s only gate, and the sand on this road is particularly deep for 20km ‒ 10km on either side of the Baines’ Baobabs turn-off. As a tattered sheet of paper stuck to a window at the gatehouse states, it’s ‘strictly 4×4’.

There are three unfenced stands at Baines’ Baobabs, each with a pit loo and bucket-shower rig. Well-spaced around Kudiakam Pan, the stands feel completely isolated, with a towering baobab or two providing shade. Stand 1 is to the north, just across the pan from an impressive cluster of seven baobabs after which the area is named. Thomas Baines was an English artist and explorer who painted the trees while on an expedition to what was then South West Africa, between 1861 and 1862.

This pain ng made the trees famous and they are to this day one of the highlights of any trip to Botswana.

There is no camp at the main baobabs themselves ‒ stand 1 is the closest at 700m, with the other two sites 2.5km to the south on the pan’s low, grass-covered fringe. Being so close, stand 1 has great views of the ancient trees, but with every visitor to the park invariably stopping at the site, it’s less private than the others, especially during the day.

The most private is stand 3, under another huge baobab, behind a screen of low trees. Stand 2 has the best of both as it’s away from the main track under three huge trees, with uninterrupted views across the pan. There is no water at any of the stands so be sure to take everything you need with you.

South Camp, 20km to the north, is a more traditional, communal campsite with ablution blocks and hot showers. The 10 tightly grouped stands sit on the southern edge of Nxai Pan itself and the permanent waterholes nearby attract far more game than you’ll find at Baines’. Stands 3 to 7 have the best shade, with 5, 6, and 7 sitting furthest from the main access road. The remaining stands are on the far sides of the two ablution blocks and have a bit more privacy. For the most solitude, pick stand 1, although be aware that it’s a bit of a walk to the loos.

South Camp is a short drive from the main, permanent waterhole —a great place for sundowners while the animals come in to drink. From here, short loops circle the grassy pan and any game is easy to spot on the open plains. The tracks themselves are not quite so flat, however. In the rainy season, the pan surface turns slick, leaving deep tyre ruts and potholes when the surface dries, so be prepared to bounce around, or after it’s been raining get very muddy.

The tarred A3 forms the boundary between the parks. From Makolwane Gate to Khumaga the Jeep track is firm and well maintained. Further south, expect more bumps and tall grass on the center island. There’s thick sand north of Khumaga Camp long the Bote River, and a 20km stretch along the Nxai Pan road and starts 10km south of the Baines’ Baobabs turn-off, towards South Camp. Roads on or near the pans are good when dry but muddy after rains, especially around South Camp, where the resulting ruts make dry-season driving very bumpy.

There are three gates into the Makgadikgadi Pans National Park:

Makolwane, Phuduhudu and Khumaga. Access at Khumaga is via ferry if the Boteto River is high. Nxai Pan has one gate, on the A3 east of Phuduhudu. Gate times: winter 6 am to 6:30 pm, summer 5:30 am to 7 pm. There is brackish borehole water and cell phone reception at all gates.

Beware of driving on the pans when it’s wet. Any hint of water turns the otherwise easy-going tracks into wheel-sucking mud.