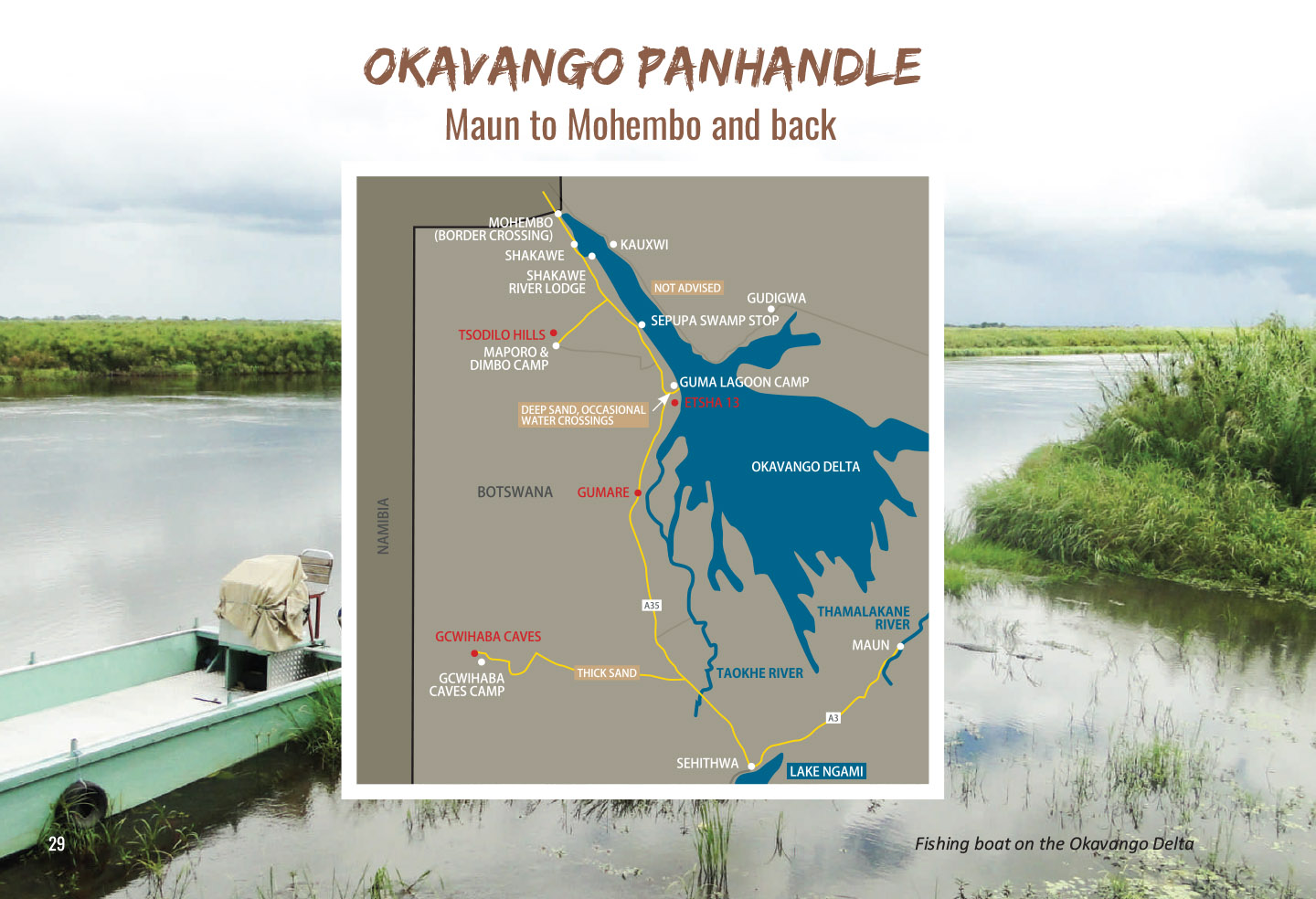 Maun To Mohembo And Back

The western side of the Okavango Panhandle is rarely explored by those visiting Botswana, and is primarily used as a thoroughfare between Maun and Mohembo, the last village before the border to Namibia. Wildlife on the western side of the delta is not as prolific as in the areas to the east: local communities cultivate sections directly adjacent to the Okavango flood plain and the region bordering Namibia was historically used for hunting. A squeeze on hunting concessions has meant that plains game and elephant herds are slowly revisiting the area, but the real highlights here are cultural and geological, and a few detours along the way will get you closer to Botswana’s heritage.

The 97km stretch of the A3 from Maun to Sehithwa is tar and in good condition and it takes about 1.5 hours. 5km south of Sehithwa is Lake Ngami, one of the last watery remnants of Lake Makgadikgadi – an ancient body of water that dried up to form large salt pans. Lake Ngami is shallow and has a high rate of evaporation so its size varies drastically. When flooded, it’s worth a visit to see large numbers of congregating waterbirds, including various herons and cormorants.

From Sehithwa, the tarred A35 north to Etsha 13 (192km) should be driven with caution. Large sections are potholed and in places, the edge of the road has disintegrated. From Etsha 13, north to Mohembo (106km), the road improves slightly and some sections have been repaired. Cau on is s ll advised, however, as livestock often wanders onto the road oblivious to oncoming traffic. North of Etsha 13, there is a handful of private campsites and lodges do ed along the Taokhe River sec on of the delta. The best is Guma Lagoon Camp, at the end of a network of windy, deep-sand tracks northeast of Etsha13. There can be flooding, but most flooded areas can be crossed (just avoid those with a log placed in front of them). There are 7 campsites in total – 6 are secluded and on grass (a rarity in Botswana), with braai facilities and private ablutions with hot water.

The seventh site is adjacent to the reception area and restaurant. It’s sandy and larger than the others and is situated at the water’s edge with the best views of the lagoon.

Further north is Sepupa Swamp Stop and Shakawe River Lodge, both of which can be reached via graded dirt roads and sand tracks off the A35. About 33km north of Etsha 13 is the turn-off to Sepupa, where there are two sets of campsites. Choose the one closest to the river for the best views. Stands are not numbered but there are braai facilities and shared ablutions, and electricity is available at some stands (extra cost per night), although it’s unreliable. Shakawe River Lodge is further north, about 15km south of the eponymous town. There are 10 campsites, each with its own water supply, sink and braai facilities. Sites 1 to 7 are on the river and have the best views, and sites 3 and 4 have the best shade.

14km further up the A35 is Mohembo and the border crossing to Namibia. There is a free pontoon at Mohembo that crosses the northern p of the panhandle and from there, a route runs back down the eastern side of the delta through various community concessions and into Chobe National Park. The pontoon takes about 10 minutes each way and operates from 6 am to 6 pm. Naviga ng the 4×4 track from Kauxwi to Gudigwa and beyond is not advised, however, and should only be attempted in convoy, with permission from the private concessions and accompanied by an experienced guide.

32km south of Shakawe is a 35km graded gravel road leading west off the A35 (calcrete was laid to facilitate 2×4 access, but it’s badly eroded and corrugated). This road leads to the gate at Tsodilo Hills, a sacred place where human history stretches back more than 100 000 years. Inhabited by the San, and later Bantu-speaking tribes, the hills are marked with rock art that provides a fascinating historical meline, and the area was declared a World Heritage Site in 2002. There is a museum at the foot of the hills and three main hiking trails. This is a community-run reserve and hiking without a guide is discouraged. There are two main campsites at Tsodilo Hills, Dimbo and Maporo, both situated outside the main gate and poorly signposted. There are no demarcated sites, but there are basic ablutions. Maporo is best for views of Tsodilo’s most dominant hill, the highest point in Botswana.

Allow at least 4 hours for this sec on. The first short stretch is graded, with occasional deep sandy patches, but this quickly turns to 4×4 only and it’s thick sand from about 80km in. The last sec on passes through the beautiful golden Kalahari scrub, where there’s a good chance of spotting plains game. It’s one of the country’s lesser-known 4×4 routes and well worth a visit before it becomes too popular: the dolomite caves span an area much larger than first presumed and portions are still being discovered.

A guide will take you deep into the caverns past stalactites, helictites and beneath thousands of leaf-nosed bats (not for the squeamish). The campsite is still being built but informal camping is available.

Back on the A35, it’s 53km to Sehithwa, then east onto the A3 for 97km back to Maun for fuel, drinking water and supplies

The main arteries of this route are tarred, but large sections are riddled with potholes and in places, the roadsides are eroded, sometimes to less than a car’s breadth. Detours off the main drag to, points of interest are either on heavily worn calcrete or thick sand tracks.

The gates at Tsodilo Hills are open from