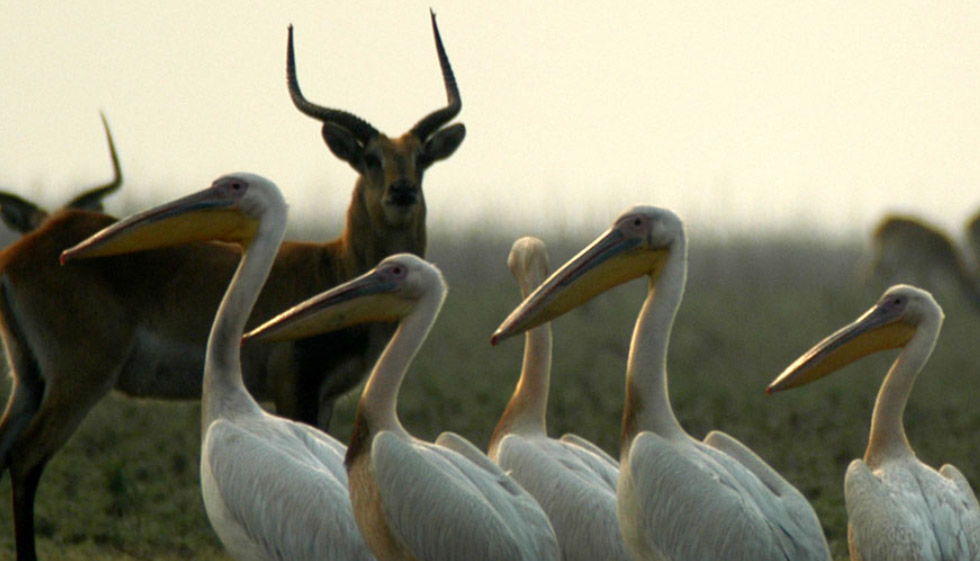 Lochinvar, although not abundant in the larger mammals, is nonetheless a park of exceptional beauty and outstanding birding opportunities with over 420 recorded species in its 428 square kilometers.

The Park is situated on the southern edge of the Kafue Flats, a wide floodplain of the Kafue River between Itezhi tezhi dam in the west and Kafue Gorge in the east. The area extends for 33kms from the Kafue River in the north to low wooded hills in the south. It includes the large, shallow Chunga Lagoon which fluctuates considerably in size with variations in river levels. The varying vegetation makes it an interesting park to visit with floodplains, woodlands, and termitaria

It is particularly well known for the large herds of Kafue lechwe, unique to the Kafue flats. Other antelope are the blue wildebeest, kudu, oribi, and buffalo. Waterbirds are especially abundant.

The Kafue Flats floodplain, in the northern section, floods from the Kafue River, and here you’ll find thousands upon thousands of the endemic Kafue lechwe, one of three subspecies of lechwe found in Zambia. More than 30 000 of them make the flats their home and move seasonally according to the flood level.

At high water, massive herds may be seen along the upper flood line and in the open grassland further south. As the floods recede the herds move north into the grassy floodplain. They feed on grasses and herbs in water up to a meter deep and are often seen wading or swimming in the Chunga Lagoon. Mating takes place mainly between December and January. Males fight over small territories known as leks and then mate with several females.

In the Termitaria Zone, trees and shrubs grow only on the large termite mounds with grasses and herbs covering the rest of the area, which often becomes waterlogged during the rainy season. There are also many small grey mounds that are always unvegetated. The magpie shrike is one of the birds to be seen in the scattered trees of this zone and the surrounding grassy plains are grazed by buffalo, zebra, wildebeest, and oribi. Very much in evidence is the ‘candelabra’ tree.

The southern area is mainly woodland, dominated by Acacia albida and Combretum trees, and is free from flooding. Bushbuck kudu, baboon, bushpig, and vervet monkey inhabit this area.

The Gwisho Hot Springs occur along a geological fault here, surrounded by lush vegetation and vegetable ivory palms. The water rises by convection from depths of over 1 km with temperatures ranging from 60° to 90° C. There are high concentrations of sodium, chlorine, calcium, and sulfates in the water. A distinctive rock is known as a ‘fault breccia’ occurs along the line of the fault and can be seen at Gwisho or the Lodge.

Sebanzi Hill is an archaeological site that has been excavated. It was the site of an iron age village, inhabited for most of the last century. Look out for The Baobab Tree with a hollow trunk large enough for several people to sleep in. Historically the tree was said to boast special powers which would protect passing travellers from wild animals. There is a curious rocky outcrop called Drum Rocks not far from the lodge, which produces a resonant sound when tapped. They are also part of local superstition in former times and passers-by had to stop and greet the rocks before proceeding.

Any time of the year is accessible although care is needed in the wet season after heavy rains. A 4WD is not necessary although advantageous in the rainy season as road conditions vary according to last rainfall and when the roads were last graded. Peak floods are reached in May at the end of the rainy season, while the water is at its lowest in October and November at the end of the dry season. The profusion of birds is extensive during the wet season when migrants arrive from the north. The game however is easier to spot in the dry season.

Lochinvar is only a three-hour drive from Lusaka and is also accessible by charter aircraft. The access road is via the town of Monze on the Livingstone – Lusaka road. Monze is 282 km from Livingstone and 186kms from Lusaka. Just north of the grain silos at Monze, turn west along a gravel road signposted at Namwala, then after about 25kms turn right at the signpost to Lochinvar, a distance of about 48 km. The park gates are open between 6h00 and 18h00 and park fees are payable on entry.

The IUCN and WWF have designated the Kafue Flats a wetland of international importance under the Ramsar Convention. A sponsored management project for the area attempts to give local people interest in conservation through both redistributions of tourist revenue and controlled harvesting of resources. The fishermen you may come across in the Park are very much a part of this unique ecosystem and in many ways the humans and wildlife here are interdependent.

There are no dangerous animals in the park, apart from buffalo, and visitors are encouraged to walk about. Cars however should not leave the roads. Lochinvar is well renowned as a superb bird sanctuary featuring many different waterfowl, raptors, woodland species, and migrants. 428 species have been recorded. The floodplain is a wide almost flat area, with black clay soils, sloping almost imperceptibly towards the Kafue River. Vegetation is made up of grasses, sedges, and herbs adapted to an annual pattern of flooding. Many plants grow up with the rising waters to become emerging aquatics at high flood. A few isolated winter thorns (Acacia albida) and palms (Borassus aethiopicum) occur on the river banks. Hundreds of wattled cranes can be seen feeding on vegetable matter dug from the soft mud and the large marabou stork scavenging for stranded fish. Around Chunga Lagoon you’ll find the greater and lesser flamingo, the pink-backed and white pelicans, African skimmer, Caspian tern, Baillon’s crake, and the red knobbed coot. Many species of duck are abundant in this environment; the black duck, fulvous duck, whistling duck, pintail, garganey, southern pochard, pygmy goose, yellow-billed duck, and the Cape and European shovellers. Waders include avocet, the Mongolian, Caspian, and Pacific golden plovers, whimbrel, turnstone, sanderling, little stint, spotted redshank, black-tailed, and bar-tailed godwits, and six species of sandpiper. Over 50 raptors occur including the black sparrowhawk, osprey, secretary bird, African cuckoo hawk, and the peregrine falcon to name a few. Other interesting sightings include the white-bellied and black-bellied korhaans, yellow-throated sandgrouse, narina trogon, and Denham’s bustard.