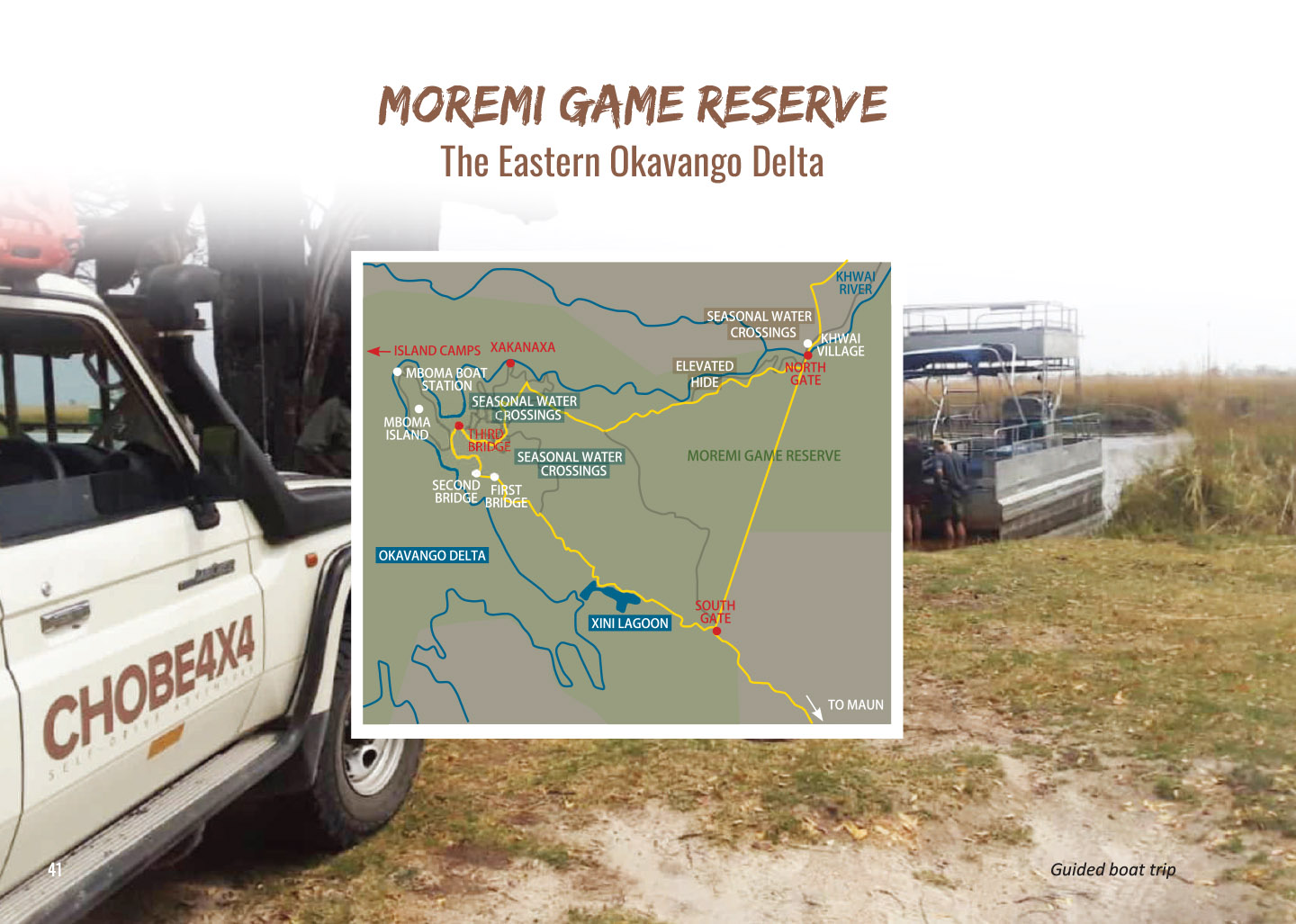 An attraction for 4×4 enthusiasts and a constant battle of nerves for the novice, Moremi’s poor roads – some of the bumpiest, sandiest, and most waterlogged in Botswana – are unavoidable, but they should never deter anyone from having one of the best wildlife experiences in the world.

Although there are numerous luxury, fly-in lodges scattered throughout the Okavango Delta, if you’re on four wheels, Moremi is your only option to explore this UNESCO World Heritage Site, and its public campsites are an essential stop on any trip to northern Botswana.

There are four main camps, all unfenced – one at each gate and two on the western waterways – plus three island camps reached by boat from Third Bridge. The island camps have no facilities, but the rest have drinking water (slightly brackish at South Gate) and ablutions with solar showers.

Arriving from Maun, you’ll find South Gate Camp under tall mopane trees behind the gatehouse. There are 10 stands with 4 and 6 closest to the access road, and 8 to 10 the most secluded. It’s a quiet, relaxed site, but the main action is north and west so few visitors stay here long term.

From South Gate, three roads head into the reserve: a straight cutline north to Khwai; a meandering track northwest to Xakanaxa; and an alternately rutted, sandy Jeep track west to the three bridges. The cutline is the quickest route to Khwai. It’s sandy, but despite some mud after rain, it’s manageable, just dull: 30km of dense mopane trees with little to see on either side.

The northwest track is much the same, but quicker if you’re heading directly to Xakanaxa – about 2.5 hours to the camp depending on what’s at the waterholes en route.

It takes about 3 hours on the road west from South Gate to Third Bridge, but allow extra me to explore the tracks around Xini Lagoon, especially beautiful in the late afternoon light. From Xini, it’s 20km to First Bridge and Second Bridge is 2km beyond.

The bridges themselves – li le more than a loose arrangement of mopane trunks – are rickety, but easy enough to cross unless water levels are exceptionally high.

The third Bridge, however, can be problematic. The campsite lies to the southeast of the bridge so arriving from the south is relatively simple.

There are nine stands, plus five permanent tents with en-suite ablutions. Elephant, hippo, lion, and hyena are frequently sighted in camp, especially after dark. Baboons have also been known to damage tents, jumping from the tall sausage and jackalberry trees at stands 1, 2, and 3. Stands 7 and 8 are arguably the pick – large, secluded, and close to the ablutions.

From Third Bridge, take the northwestern Mboma loop, which is overgrown and sandy on the western side, but passes through spectacular reed beds, home to large herds of buffalo. On the northern tip, there’s a short river crossing to the Mboma Boat Sta on, the only place in the reserve that offers guided mokoro trips.

Leaving Third Bridge to the northeast can be tricky. If the bridge is open it’s an easy hour along well-used tracks to Xakanaxa campsite. If closed, however, allow for a 4-hour detour back past First Bridge, then north along an occasionally waterlogged, and often difficult to navigate, track.

Without a GPS, or if water levels are high, it may be significantly more than 4 hours before you pop out
again some 10km south of Xakanaxa. The area south of Xakanaxa has the largest network of tracks in the reserve with plenty of water crossings even in the dry season. The main track, however, poses few problems and there are plenty of side roads that won’t trouble novice 4×4 drivers.

The stands at Xakanaxa are spread out in a line along the southern edge of a waterway. Stand 1 is the most secluded on the eastern end, and the ablutions are between 3 and 4, and 5 and Stand 7 is on a slight rise with views over the reeds, and 8 to 10 are the least private, on the access road near the boat station.

From Xakanaxa, the main track heads east to North Gate. The first section passes through dense mopane trees but then opens out into a beautiful leadwood forest. Don’t miss the elevated hide that looks out over a large hippo-filled pool about 15km before the gate.

Camping at North Gate feels a bit wilder than at South Gate. Stands 1 to 3 are the exception —all three are near the gatehouse with views of the cell phone mast across the Khwai River. Stands 4 to 7 are spread under shady trees in the center, but 8 to 10 are more isolated, with expansive views down the river to the east and a good chance of seeing elephants crossing the water in the late afternoon sunshine.

Moremi is 4×4 throughout. Even in the dry season, short water crossings are common, especially in the northwest. After rain, many of these become waterlogged and impassable and later dry to deep, bumpy ruts interspersed with thick sand. From Maun, the South Gate access road is hard and potholed. Entering at the North Gate at Khwai requires a river crossing, which is usually straightforward, but can be treacherous when the

river is swollen. Third Bridge itself is in poor condition and is often closed – check when entering the park – making it necessary to take a several-hour detour to reach Xakanaxa camp.

South Gate (Maqwee) and North Gate (Khwai) have camping, water and ablutions. North Gate has the only cell reception in the reserve. Gate times: winter 6 am to 6:30 pm; summer 5:30 am to 7 pm.

The Xakanaxa Boat Station is the furthrest from the delta’s main channels. They offer the cheapest boat trips in Moremi, but you’ll need to book at least two hours to reach open water.