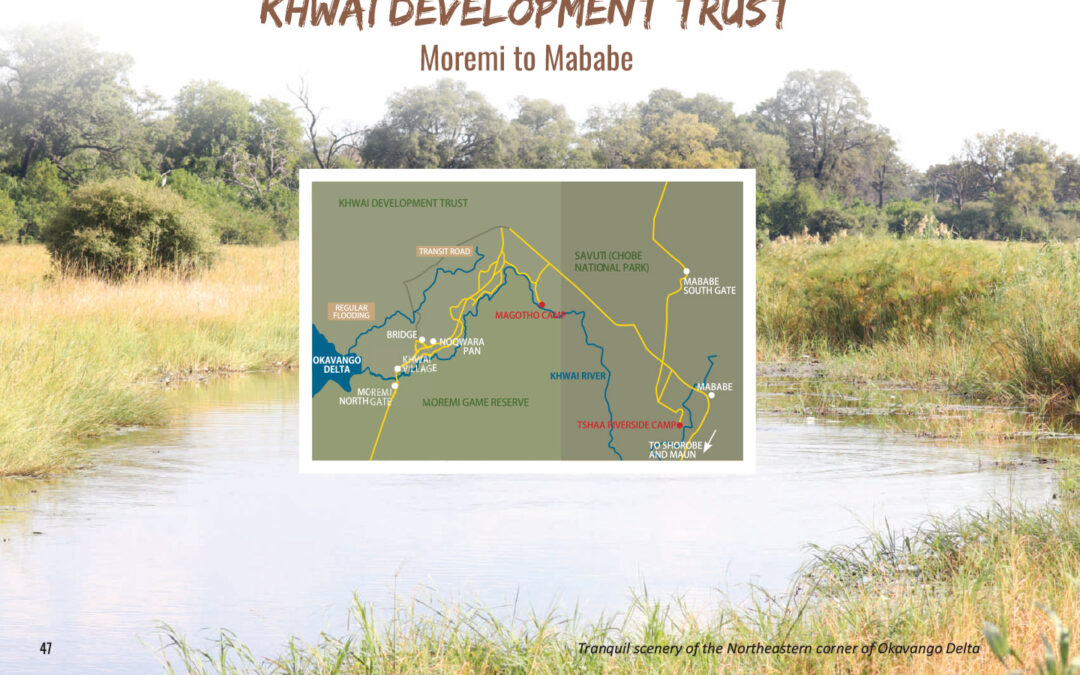 Khwai Development Trust is a 180 000ha community-owned concession in the northeastern corner of the Okavango Delta. It’s wedged between Moremi Game Reserve and Chobe National Park and its natural boundary to the south, the Khwai River, is also its biggest asset. Riverine woodland, dominated by ancient camelthorn, knobthorn, and apple leaf trees, stretches the length of the river. The top tiers are home to birds, primates, and leopards, while exquisite roan and sable antelope and lechwe join elephants at water level for a drink.

From the wooden bridge outside Moremi North Gate (sometimes called Bridge over the River Khwai), it’s less than 1km to Khwai village along a graded gravel road. Firewood, basic supplies, and cold beer are available there at the spaza shops. Be sure to stop at the Khwai Development Trust offices to register your arrival by showing your booking and payment. Day visitors are required to pay park and vehicle fees here too.

There are two routes across the southern region of the Khwai concession and while the area does extend north, the best 4×4 driving and game viewing area in the south, along the river. The first route is a graded gravel transit road that loops around the top of the southern sec on. It’s the quickest way from Khwai village to Mababe, but the best route is to keep straight at the fork which is about 2km northeast from Khwai village (le takes you onto the transit road, although it’s s ll a sand track at the fork) towards Moqwara Pan. This sec on can become flooded during the wet season, so check with the development office if it’s safe. Logs placed in front of water crossings indicate that it is not safe to cross. The main track (recommended route on map) keeps fairly close to the river while still avoiding any routes that may have become waterlogged. Various loops peel off this 13km-long stretch and they are worth taking if time allows. Be prepared for water crossings.

Popping back out onto the transit road, it’s 5km to the turn-off for Magotho Camp over graded gravel and fine white sand that covers the roadside foliage like snow. It’s then another 4.5km of sandy 4×4 track to the campsite.

There are 16 beautiful, large, grassy stands at Magotho but there are no facilities. It’s entirely self-sufficient and, less than 300m from the Khwai River, totally wild.

An alternative is Tshaa Riverside Camp, another 14km from the turn-off to Magotho along the transit road. It’s just outside the Khwai concession and, technically, falls within Chobe National Park, but it’s run by the nearby Mababe village community and at the time of going to print no park fees were payable.

It’s a gem, with four large, clean, shady campsites overlooking the Khwai River. There are private ablutions at each stand (stand 2 has a loo with a view) and a donkey boiler for hot water. After a good, hot shower, the G&T’s taste better as you recount the day’s sightings while hippo harrumph just meters away.

It’s a 22km drive from Mababe village to Chobe’s Mababe South Gate, much of it along deep sand tracks, and the drive takes about an hour. If you’re heading north into Chobe national park keep in mind that the nearest fuel stop is in Maun and it may be necessary to make the 117km drive along the calcrete road that heads southwest to Shorobe and then onwards to Maun to refuel.

The transit road cutting through the Khwai Development Trust is graded gravel and mostly good. Seasonal flooding, however, means that there are several water crossings and occasional detours. Game-drive tracks in the park vary between deep sand and mud.

No formal gates. Visitors are to report to the Khwai Development Trust offices in Khwai village from 8 am to 4 pm. Contact +267-680-1211 for park and vehicle fees.