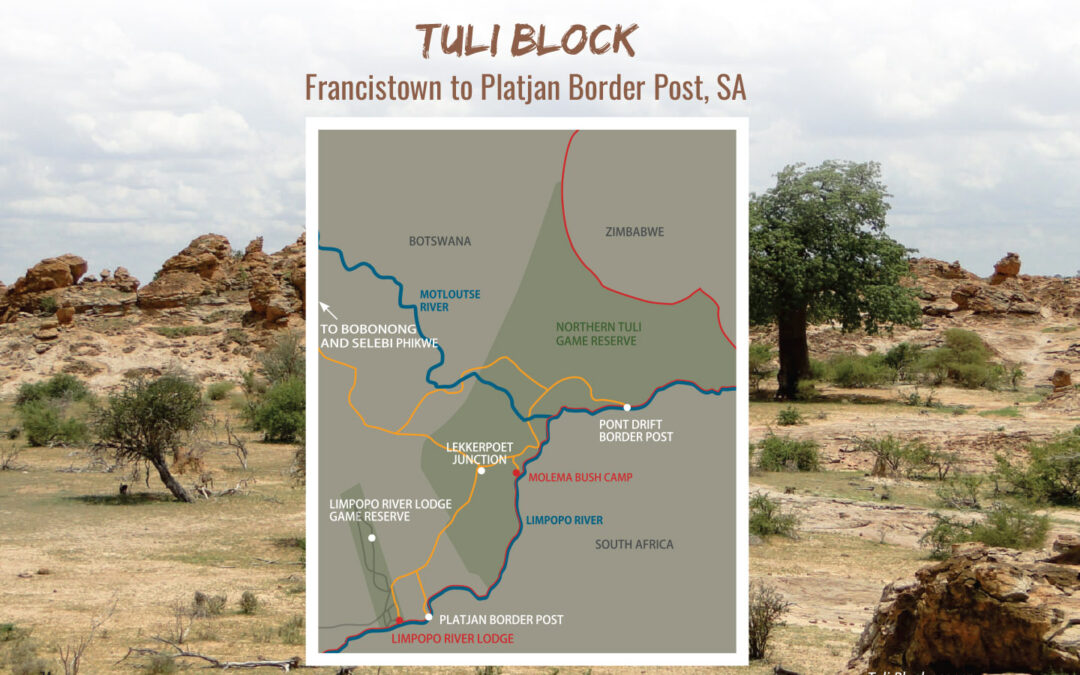 Tuli Block – wedged in the southeastern corner of Botswana between Zimbabwe and South Africa – is a popular bush break for South Africans thanks to its proximity, diverse landscape, and density of game. However, the area mostly comprises private reserves and, as such, self-drive options are limited to the main gravel roads that bisect it. Still, there is plenty to see and some private reserves allow staying guests to explore sections of the park on their own.

The long drive to Tuli from Francistown involves zigzagging east along some badly worn tar roads from Serule, 88 km south of Francistown on the A1, to Lekkerpoet Junction, through Selebi Phikwe, Sefhophe, and Bobonong. The total distance from Serule to Lekkerpoet is 209km and can take up to 4 hours. From Lekkerpoet Junction the graded gravel transit road to the northeast bisects the Northern Tuli Game Reserve and ends at the Pont Dri border post, which gets you back into South Africa.

About 5.6km along this transit road is the turn-off to Molema Bush Camp, situated inside the Northern Tuli Game Reserve. There are four large, well-spaced campsites at Molema, each under the shade of large trees. Each stand has private ablutions with hot water and braai facilities. Self-driving is not permitted in Northern Tuli Game Reserve, but walking tours and guided 4×4 trips can be arranged on request.

A good, self-drive morning trip, however, is to take the transit road northeast to the Pont Dri border post, crossing the Motloutse riverbed past Solomon’s Wall (note: driving along the Motloutse riverbed is illegal). It’s a 60km loop (30km each way) that bisects private reserves and there’s a good chance of spotting plains game and, if you’re lucky, leopard near the road. A sec on of this transit road, about 5km south of the Motloutse River, is gated farmland to keep out wild animals, especially elephants. There is usually someone posted at the gate to open it and let you through.

The best option for self-drivers waning to make the most of this area, however, is to head southwest at the Lekkerpoet Junction and onto Limpopo RiverLodge Game Reserve, where 120 km2 of dirt road is open to exploring. Camping is at one of 8 sites overlooking the Limpopo River, with private ablutions, a donkey boiler, and braai facilities. The sites are splendid and well-thought-out with occasional small touches (such as loo rolls and hooks in the ablutions) that many other campsites lack.

Several pans and waterholes dot the reserve and the trails range from sandy Jeep tracks to more challenging rocky sections, all marked out with distances on a map provided at reception. It’s a little slice of South Africa right on the border and just 12km away is a bridge crossing over the Limpopo River to the quiet Platjan border post.

The routes between Francistown and Lekkerpoet Junction alternate between good freshly laid tar and worn, potholed roads. There are roadworks in some sections. Main roads through Tuli are graded gravel but are heavily corrugated in places. 4×4 paths through drivable sections of the reserve are either sand or rocky.

Molema Bush Camp is operated by Tuli Wilderness Trails. Camping fees include community levy). +27-78-391-4220, www.tulitrails.com
Limpopo River Lodge is a privately owned reserved with camping on the banks of the Limpopo River +267-7210-6098,