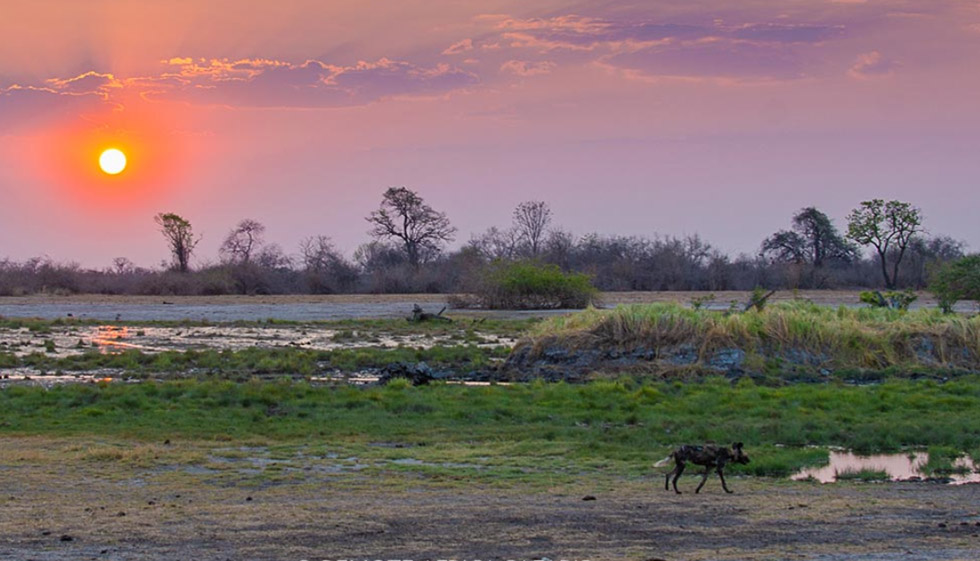 Experts have dubbed South Luangwa to be one of the greatest wildlife sanctuaries in the world, and not without reason. The concentration of animals around the Luangwa River, and its oxbow lagoons, is among the most intense in Africa.

The Luangwa River is the most intact major river system in Africa and is the life-blood of this 9059 km2 Park. The Park hosts a wide variety of wildlife, birds and vegetation. The now-famous ‘walking safari’ originated in this Park and is still one of the finest ways to experience Africa’s pristine wilderness first-hand. The changing seasons add to the Park’s richness, ranging from; dry, bare bushveld in the winter, to a lush, green wonderland in the summer months. There are 60 different animal species and over 400 different bird species in South Luangwa National Park. The only notable exception is the rhino, sadly poached to extinction.

With about 400 of Zambia’s 732 species of birds appearing in the Park, including 39 birds of prey and 47 migrant species, there is plenty for the birdwatcher to spot, whatever the season.

An interest in the vegetation of Zambia will enhance your experience of the bush. Some magnificent trees and plants grow in the Luangwa Valley and it certainly adds to the richness of one’s experience to be able to recognize the different tree species and to discover exotic wildflowers.

Among the more common trees in the valley are the mopane, leadwood, winterthorn, the tall vegetable ivory palm, the marula and the magnificent tamarind tree. There are some magnificent baobab specimens and a few large ebony forests to admire.

Seasonal changes are very pronounced in Luangwa. The dry season begins in April and intensifies through to October, the hottest month when game concentrations are at their height. Warm sunny days and chilly nights typify the dry winter months of May to August.

The wet season begins in November as the leaves turn green, and the dry bleak terrain becomes a lush jungle. The rainy season lasts up until the end of March and the migrant birds arrive in droves. Each lodge stays open for as long as access is possible, depending on its location in the area.

There are several lodges that remain open all year in the central area of the park. Recently bushcamps are now opening in the “Emerald Season”.

One can approach from three directions. The usual route is from Chipata. This is a good road if a little corrugated and the 123km drive takes about two hours to Mfuwe, just outside the Park. If travelling in a robust 4×4 from Lusaka, it is possible to take a shortcut from the Great East Road at Petauke, up alongside the Luangwa River to Mfuwe. Only to be attempted well into the dry season. A good overnight stop along the way is at the Luangwa River Bridge at Bridge Camp.

The Northern access is from Mpika on the Great North Road or Lundazi, near Zambia’s eastern border with Malawi. Just below Mpika, there is a road running down the Munyamadzi Corridor between North and South Luangwa Parks. It is passable but is only open between August and October and only in 4WD and preferably with two vehicles as help is a long way away. The mountain pass down the escarpment is quite formidable, very rocky and bumpy but the view over this, the tail end of the Great Rift Valley, is quite spectacular.

If you’re in your own vehicle, be sure to get a map of the Park from the Crocodile Farm at the Park entrance and follow the loop roads graded in the Park, past dambos bursting with hippos, crowned cranes, grazing antelope and scurrying baboons. Further out on the plains you’re bound to see the large elephant herds, reaching up to 70 in number. Buffalo are abundant and spread throughout the Valley.

The hippopotamus is one animal you won’t miss. As you cross over the bridge into the park there are usually between 30 and 70 hippos lounging in the river below and most of the dambos and lagoons will reveal many. There is estimated to be about 50 hippos per kilometre of the Luangwa River!

Zebra can be seen running in small herds of about a dozen. The difference between Zambia’s zebras and those in the south and east of Africa is in the stripes. Here they are evenly spaced as opposed to broad light stripes with a faint shadow stripe in-between.

The Park has 14 different antelope species, most of which are easily seen on game and night drives. Watch out for the elusive bushbuck, preferring to inhabit densely covered areas. The common duiker is not that common near the Luangwa River but inhabits the backcountry of the Luangwa Valley. The largest of antelope is the eland, usually near the Nsefu sector of the Park. The most numerous antelope is the impala, these gregarious animals can be seen in herds all over the Park. Not to be confused with the puku, of similar size but a much fluffier buck with a rich orange coat and also prolific.

Perhaps the most beautiful is the Kudu, with its majestic spiral horns and a delicate face. Although fairly common, they’re not always easy to find due to their retiring habits and preference for the dense bush. Reedbuck, roan, sable, hartebeest, grysbok, klipspringer and oribi are all here but not prolific in the central tourist area of the Park. They tend to stay deeper in the remote parts towards the Muchinga escarpment.

Birdwatching is superb in the Valley. Near the end of the dry season, when the river and oxbow lagoons begin to recede, hundreds of large waterbirds can be seen wading through the shallows. The red-faced yellow billed storks move along with their beaks open underwater, disturbing the muddy liquid with their feet until the fish flop into their mouths. The pelicans tend to operate in lines abreast, driving the fish before them into shallows before scooping them up into their beak pouches. The striking 1.6m saddle bill stork makes quick darting movements into the water. Then there’s the marabou stork, great white egrets, black headed herons, open billed storks and the stately goliath heron that can stand in the same position for hours before pouncing. Of the most beautiful are the elegant crowned cranes, with their golden tufts congregating in large flocks at the salt pans.

Around the same time, just before the rains set in, in November, the Palearctic migrants from Northern Europe and the intra-African migrants arrive to exploit the feeding opportunities that the warm rainy season brings. These include the red chested cuckoo, white storks, European swallows, swifts, hobbies and bee-eaters, as well as birds of prey such as the Steppe eagles and Steppe buzzards that come all the way from Russia. A special sight is the hundreds of brightly coloured carmine bee-eaters nesting in the steep sandy banks of the river.

The ever-present sounds of the birds in the Valley takes some getting used to. An early caller is the ground hornbill, looking like a well-dressed turkey, but emitting the sound of a deep bass drum. Also to be heard is the melodious Heuglin’s robin, the shrill cry of the fish eagle, set to the background cooing of doves.